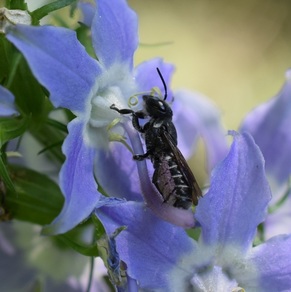 Megachile campanulae pollinating Campanula americana. Image by Dena Grossenbacher.
The degree to which plants self fertilize affects patterns of genetic diversity, the evolution of floral traits, and the ability of populations to adapt. Campanula americana is self-compatible, and thus could have a mixed mating system. Past work in the lab provides evidence of increased selfing at the northern range edge of C. americana—northern edge populations have higher autogamy potential in the absence of pollinators and decreased inbreeding depression relative to more southern populations. Classic adaptive hypotheses suggest that increased selfing at range edges reflects selection for reproductive assurance in the absence of sufficient pollinators or few mates. However, the genetic signatures of past colonization could also contribute to increased selfing at range edges. Specifically, reduced genetic diversity due to drift and sequential bottlenecks may reduce the cost of selfing (i.e., inbreeding depression), thus allowing for the evolution of mating system. Phylogeographic work shows that C. americana persisted in refugial populations in the Southeastern US, and migrated northward after glacial recession. We are exploring how both adaptive processes and population genetic structure due to this historical migration affect population-level selfing rate using a combination of population genomic, ecological genetic, and field approaches. We aim to gain a holistic picture of how both adaptive and nonadaptive processes contribute to the evolution of plant mating system in an explicit construct of historical range expansion. 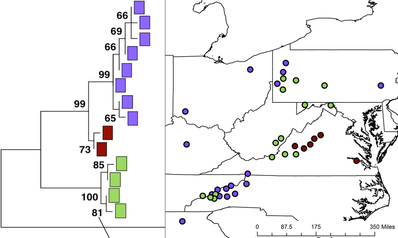 Chloroplast lineages of the American Bellflower are in contact in North Carolina, Pennsylvania, and Virginia. Adapted from Barnard-Kubow, Debban, and Galloway 2015.
Speciation has created the rich diversity of life we see today. It is initiated by the development of reproductive isolation within a species, but speciation rates measured from phylogenetic studies are often lower than might be expected considering how common reproductive isolation is within species. This difference may be caused by the ephemeral nature of isolated lineages within species. However, the factors that determine whether or not a lineage persists and diverges into a new species remain largely unknown. It is important to catch species while they are diverging to understand what initiates this process, but most studies focus on young but discrete taxa. The American Bellflower (Campanula americana) has three divergent lineages with variable levels of postzygotic reproductive isolation between them. These lineages are in secondary contact in multiple geographic regions, which provides an excellent opportunity to study the earliest stages of speciation.

Secondary contact between lineages that diverged in allopatry often results in the production of unfit hybrids due to postzygotic incompatibilities that arose during isolation. Incompatibilities may cause an accelerated rate of divergence in contact zones, referred to as reinforcement, due to an increase in prezygotic reproductive isolation as an indirect response to selection against making unfit hybrids. Alternatively, secondary contact may have the opposite effect, with lineages instead evolving higher hybrid fitness as a consequence of elimination of the genes that cause postzygotic isolation. Understanding when lineages move toward divergence or cohesion during secondary contact will give insight into the mechanisms controlling whether within-species lineages become species themselves.
Header image by Dena Grossenbacher
Powered by